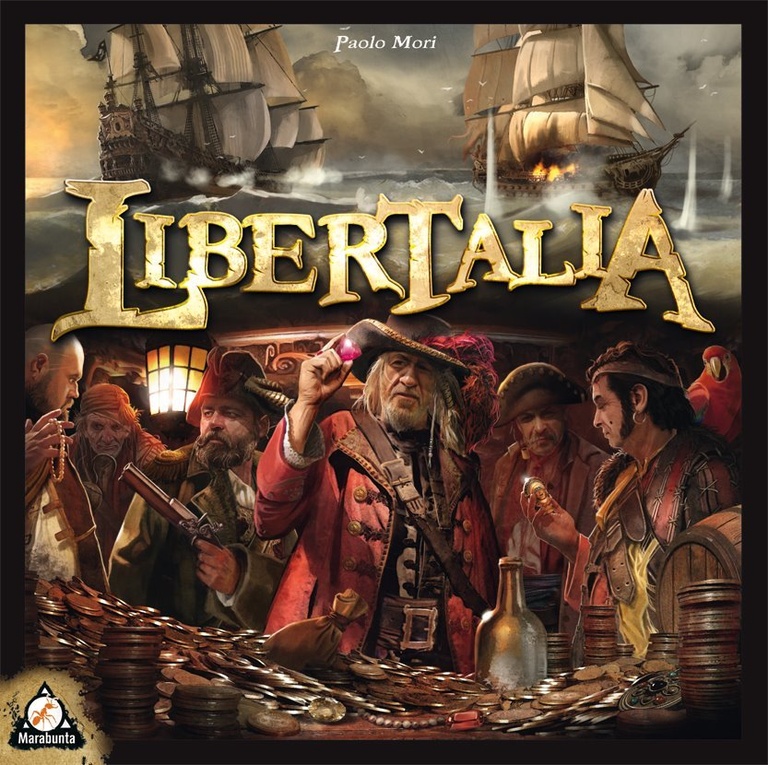 Purpose and preparation of Libertalia

The goal is simply to be the richest pirate. For three rounds, we will plunder other ships for the purpose of Libertalia. To do this, we will have games lasting 60 minutes, two to six players.

Before starting the game, each player will choose a pirate, with their respective crew. The youngest player shuffle their character cards and steal nine cards. After saying aloud the rank and name of these cards, the other players will look at their decks those letters and, with them, make up a mallet.

Then each of us will randomly select one of the tabs crew. Also we will take the den, which will serve to make the cards drawn to the game, scoring marker and thirty letters of the corresponding color. In addition, each receive ten doubloons. The rest will be left in the bank. Now, each player places his den and his letters before him.

Booty chips will be introduced in the bag to mix. So six tabs catch by each player who has in the game and placed in the hollow intended. You can now start the game, for which we must take account of the character cards and letters of special actions.

Character cards represent the different members of the crew, with different skills, names and ranks. In turn, some will be more important than others. Furthermore, special cards, whose actions are required to perform, are associated with a particular time that may be used. These cards are divided into Day, Sunset, Night and New Tomorrow.

Actions under Day and Sunset, can be resolved only once per game, which is when the character comes into play. The first will be resolved in order of increasing range, while Twilight is resolved in descending order.

Evening special actions will be resolved during the night of each shift, as its name suggests, provided the character with the special action is in the lair of the player. The End of Campaign will be resolved only once per game, when the end of the campaign in which the character has come into play only if it is still present in the lair of the player at the end of the campaign.

How to play Libertalia

As we explained, each game will consist of three rounds. For each of them, we must solve six days of looting. These rounds will sack long special stages except the end of season stocks, but adding a resting phase at the end of the three previous rounds, where we’ve gotten wealth will be distributed.

Our level of wealth is obtained by adding the loot they have more doubloons our guard. The chests are obtained doubloons worth five, three jewels and goods of one. Finally, sets of three maps we have twelve doubloons worth, but it will only add them in threes. That is, if we get one or two loose, not counted.

Meanwhile, not all objects added riches because there are cursed relics that will make us lose three doubloons. In addition, sabers and Spanish officials have no value. The sum of all the doubloons during the three rounds of play will dictate the winner of the game.